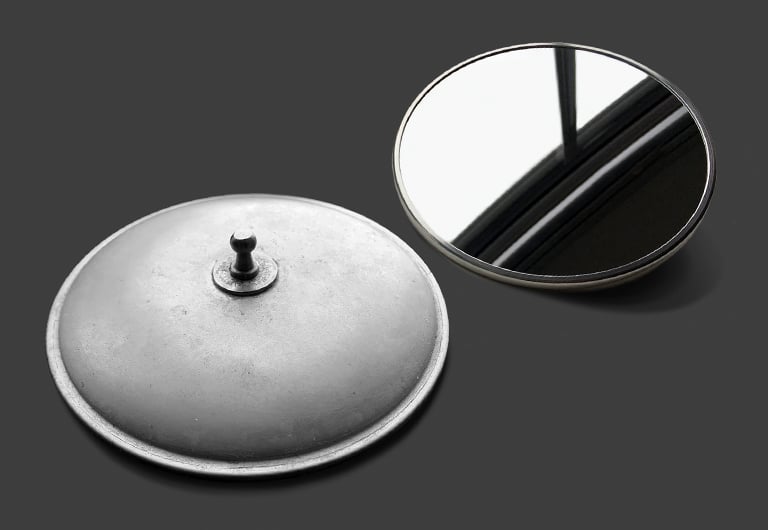 The Auto Wares Splitscreen convex mirror is Identical in size and profile to the original factory item your bus left the factory with, however, it has the benefit of convex glass to provide you with a greater field of view enabling you to see much more of the road beside you.

Every Auto Wares Splitscreen convex mirror has been meticulously handmade in England using only the finest traditional skills. Eight different companies have been involved in its incarnation and every one of them are amongst the best British manufacturing has to offer.

Firstly, the all important convex glass has been made from fully tested industry standard 2mm, 1260 radius first surface anti dazzle chrome glass, whilst the outer casing is hand spun in 0.7mm thick aluminium which after forming around a die, has had its edge carefully hand rolled to hold the glass securely. The rear mounting peg has been artfully machined to incorporate a hidden thread, which is then secured inside the casing by hand with a small polymer-insert lock nut and as an extra precaution, a small droplet of thread lock. This will eliminate the common issue of mirrors spinning on the peg. The rear 20mm band has then been laser engraved with the original factory part number, as well as the Auto Wares wordmarque.

As a finishing touch, the convex mirror outer casing has been 'patina'd' to look old/aged, perfect for your OG paint bus.

When you fit an Auto Wares Splitscreen Convex Mirror to your Splitscreen bus, you are set to reap the benefits of a wider view whilst driving your splitscreen and taking the guesswork out of changing lanes!

Sold individually or in pairs.

Need a mirror clamp? We sell those too www.autowares.co.uk/product/mirrorclamp